I arranged with our Vicar to take the photos on Sunday, October 17, which was also a convenient day for my two models.  After the last service the church would be free and I would not be in anyone’s way or be interfering with church services.  I made sure all batteries were fully charged, and I made up the light-boxes in preparation for a quick set-up.  I always take photos in RAW and having experimented at home with both lighting and white balance I decided to manually set the white balance on my camera to the lowest colour temperature for maximum effect (2500K). 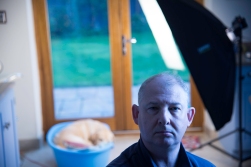 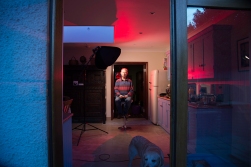 Props:  ‘No Pets’ sign (sticker mounted on a white board and stuck to the wall by the door using double sided sticky pads.  My pet dog Honey on her lead, walking stick to imply their journey.

The lights were configured as follows:

In side the church I set up a speedlight with a TT5, gelled red and a reflector dish attached then mounted this assembly to light stand and positioned behind my female model (Ann-Marie) at head height in order to create the red rim-lighting.  I then used a speedlight with a TT5 and an amber gel with the 120 x 40 soft-box to illuminate the whole body length of Ann-Marie.

As the weather was overcast, I needed to use the large soft-box un-gelled to illuminate my second model (Graham) with my dog (Honey).  This was fitted to a light stand and stood to the left of the camera above the height of Graham and angled down. 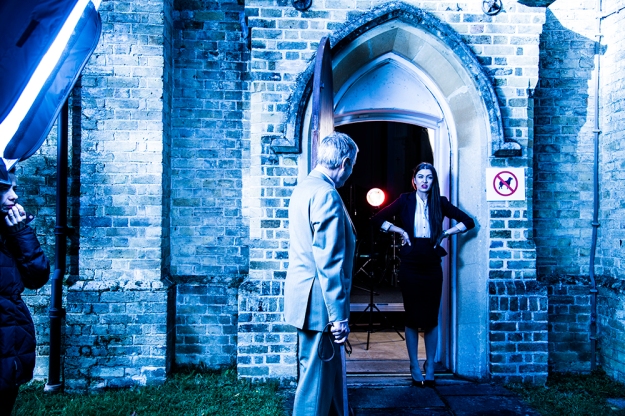 This test shot illustrated my lighting and you can just see the edge of the rectangular soft-box top right corner of the door above and behind Ann-Marie.

However, the shoot didn’t start as planned.  The Vicar was not around as I later discovered that he had gone away with his wife as it was her Birthday and he hadn’t mentioned my photo shoot to anyone.  I was able to arrange for a volunteer to return to the church after lunch to open it up for me for my photography; but the next problem was when I returned at the appointed time and the church was opened for me we could not find a key to the Choir Vestry (the door I had chosen for the shoot) so I had to use an alternative door that was accessible which was a fire-door on the side of the church.  This presented two new problems firstly I was exposed to the wind which was a little gusty and behind this door which was close to the alter an large stage was set up for the 11am services with musical instruments.  The door wouldn’t stay open and we had to find something to wedge it open that I later had to remove in Photoshop.  The door itself was a fire-door and again these handles would have to be erased and the background behind Ann-Marie would also need altering in Photoshop.

On setting up the lighting I managed to drop an expensive Nikon speedlight on to the stone floor, luckily it still worked but something appears to be loose inside; so I will no doubt have to send it off to Nikon for servicing.  My wife had to hold the large soft-box to stop it from being blown over and Honey was naturally restless.  The other problem was that the speedlights needed lite to recycle; so didn’t always fire with each shot taken.  This is where more expensive studio lights prove superior but at this moment in time I can not justify the investment.

I directed Ann-Marie to stand just inside the church door with the rectangular soft-box directly opposite her and the red gelled light hidden behind her head and holding up her hand to indicate the signal to stop and then to waggle her finger to convey the same message.  I also directed Graham to for two types of pose the first look thoughtfully at the dog and the second to be looking towards Ann-Marie for comparison.  I had to make various adjustments to positioning of the two soft-boxes and power output which eat into the time. We were only able to work for two hours before the weather threatened rain and we had to stop and I was feeling a little frustrated and low as I felt that I hadn’t been able to find the picture.

On returning home I transferred the photos to my computer but then left it for a couple of days before properly looking through them in Lightroom.  When I returned to my work I found that I had taken 290 photos and after spending some time comparing the images I was able to select a six images that I felt that I could merge together to make one suitable picture.

I then selected which images would be suitable for Graham and Honey and which would be suitable for Ann-Marie, I then made the appropriate adjustments in Lightroom to enhance the cold or warmth make any-other fine adjustments before exporting to Photoshop.  In Photoshop I then had to remove the unwanted artifacts from the pictures such as the item used to wedge the door open the fire-door handles and the staging behind Ann-Marie.  When the images were sufficiently ‘cleaned-up’ I merged the two to create my final picture.  As it happened only one image of Graham with only one image of Ann-Marie worked as suitable matches, due to the positioning of Graham and where Ann-Marie was looking; but I had what I was originally looking for which was a moment of decision from the Traveller as the doorman is advising him that he must enter alone.  I was pleased that this image also provided a great expression from Honey as she looks back at Graham. 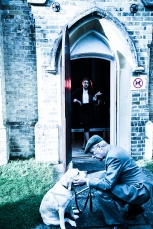 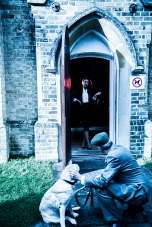 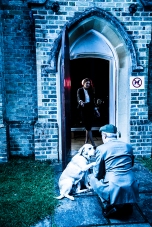 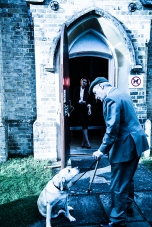 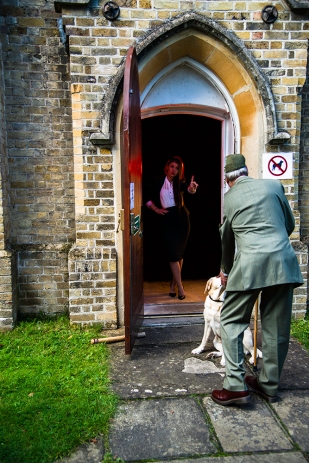 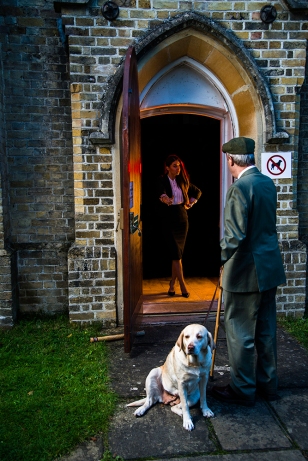 From these six images only two worked together. 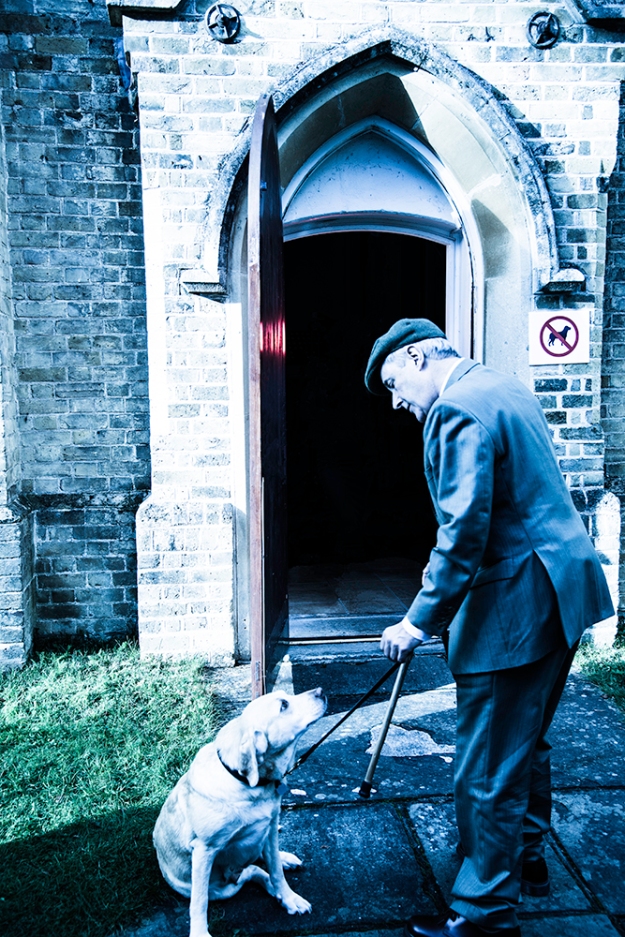 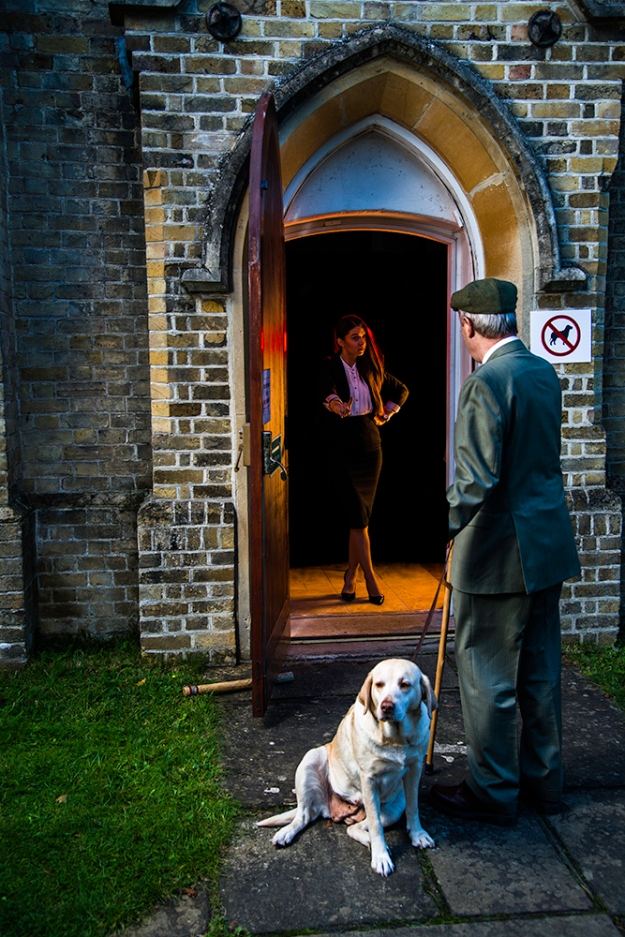