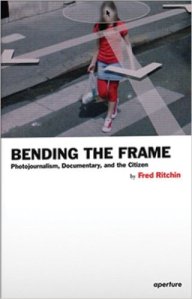 I have just finished reading this book which is a critical look at the current challenges facing photojournalism and documentary photography.  Ritchin looks at how the rise of the digital media through the internet is threatening and changing photojournalism and traditional documentary photography.  He points out that less funding is available to documentary photographers from the traditional sources and that the day of the front page is coming to an end with a predicted total disappearance of the printed newspaper by 2040, beginning with the USA by 2017.  Ritchen suggests that the news media is going through a transition and new ways to grab and hold the readers attention has to be found.  This he acknowledges will be difficult as news images now have to compete right next to an attention grabbing advertising image, something that just was not done in print.  Moreover, with digital webpages images are constantly being replaced or slide-showed in order to maximise display space whilst the viewers attention spans diminish faster than the slide shows.  In a shrinking market for newspaper and magazine publishers Ritchin observes that it is tougher for new photographers to get their work published as publishers / editors are more interested in the fame of the photographer than the work he produces, suggesting that modern editors are more influenced and controlled by capitalistic ideas of celebrating the celebrity in order to sell.

An interesting and useful book for anyone looking to work in  photojournalism / editorial world.

I purchased it and read it as I thought that it might have relevant information for my course on Context and Narrative; but although it was an interesting read providing background to this industry I am not sure how useful I will find it in the future.  I will keep it on my shelf in case I need to refer back at a later date.