Yesterday, Saturday, my wife and I visited London to see the William Eggleston Exhibition at The National Portrait Gallery and then go on to see a play.

The weather was warm but wet however, this didn’t dampen our day.  On arrival to Trafalgar square, I mistakenly went in to The National Gallery and after a quick scout around asked a member of staff where the William Eggleston exhibition was.  The young lady gave me a look that one would have expected to get from the head waiter at Simpsons when asked for a Big Mac and fries.  She politely and a little condescendingly informed me that I was in the wrong gallery and directed me around the corner for The National Portrait Gallery.

As I walked around the corner and entered The National Portrait Gallery, I noted that it is all part of the same building but separated and given a side entrance.  Unconsciously perhaps placing portraiture in it’s considered place in the hierarchy of Art.

Photo by William Eggleston, this eligant but prim woman sits legs crossed next to a post wrapped in chain and pad-locked.  The post appears to act like a metaphor you can look bot can’t touch!

Anyhow, having found the exhibition we enjoyed Eggleston’s mixture of black-and-white and colour photos of mostly friends and family.  Some of the pictures on display were seen for the very first time as they had come from his private collection.  Also there was a display of some of Eggleston’s video work that he had made in the early 70’s a genre that I was unaware that he has worked in.  His pictures and video was of his life in Mississippi and it was clear from his images that he is a very good observer a talent that I have always had myself but only now with this photography degree course can I see a real use for it and have a reason to develop it further.  This exhibition was about his portraiture based work and had interesting details about his subjects, such as the dentist who had lost his practice through his use of drugs and later died in suspicious circumstances; his road trip with Dennis Hopper; his friends and neighbors, etc. 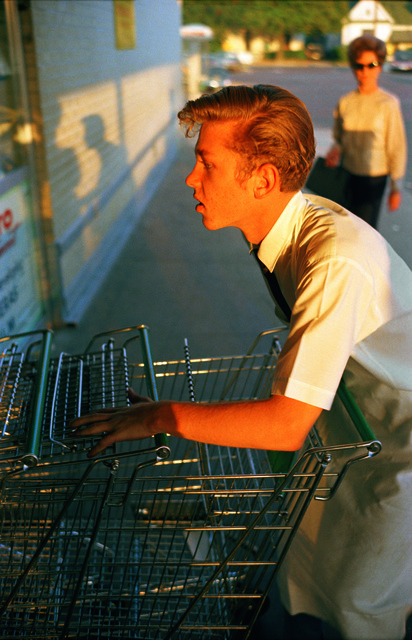 This image Eggleston describes as his first attempt  with colour and pleased with it’s success that he felt worked continued.  I agree the low sun from the sun-set or sunrise gives this young man’s skin tomes a very warm hue.  I like the shadow that repeats, yet with what is probably Eggleston’s shadow it also suggests another narrative.  The lady in the corner also works for a triangular formed composition.

My personal favorite photo was of a girl he photographed in black-and-white in a local night club who was clearly had at least one too many.  (Didigiat image unavailable)

Eggleston’s Grand-father with his man-servant at a funeral, photographed by William Eggleston.

I note that many photographers that are recognized in the art world are from privileged or fairly affluent backgrounds, naturally photography is not a cheap past time and for it helps to mix in the right circles in order to get interesting pictures in sometimes exotic locations.  Eggleston is no exception, from a wealthy family background he has been fortunate enough to have the support and subject matter to tap in to.

Following on from this exhibition we ended the day enjoying a good play about a 30’s film producer, called ‘The Last Tycoon’ The play reminded me of my exhibition and the title reminded me of the photo of Eggleston’s Grand-father with his man-servant who is unconsciously mimicking his boss’ pose.

I learned about the existence of this essay from a text-book I read a few weeks ago (Reading Photographs by AVA Publications) whilst on holiday and thought it useful to get a copy and read it for myself.

Visual Pleasure and Narrative Cinema by Laura Mulvey has only recently been published as a book accompanied by an illustrated essay by  Rachel Rose.  This essay has apparently been very influential in the world of cinema since it’s first publication in ‘Screen’ 1975.  So I thought it important to read it.

The essay discusses a similar argument to John Berger in his famous ‘The Way of Seeing’ regarding how woman have been used in the arts and media as sexual voyeuristic objects. that employed and seen on the movie screen.  Mulvey goes on to argue that women on the cinema screen represent castration due to their lack of the male sexual organ and also objects of desire by way of their glamour.  Mulvey suggests that the audience is encouraged to become voyeurs by the the theater that puts them in the dark; so that they can feel that they can look in private.  She also goes on to consider the ideas of voyeurism that she believes has been explored by the great Hollywood Directors, Sternberg and Hitchcock, in their movies, Morocco and Dishonored by Sternberg and ‘Vertigo’, ‘Rear Window’ and ‘Marnie’.  Much of Mulvey’s essay is now regarded as out of date regarding how women are now portrayed in modern films (by Mulvey’s own admission as a footnote).

A small book of about only 30 readable pages, interesting and I am sure that if I didn’t read it now I would find myself reading it later in my degree course.

This is a must have book for any degree student for photography!  Basic Critical Theory for Photographers by Ashley la Grange, published by Focal Press.

This book debunks the sometimes baffling academic language from the likes of Barthes and Sontage and summarises the message that authors like these are trying to put across to the poor half comatose reader with assignments to help the student explore these theories more thoroughly.

This is a very good book to refer back to as it contains lots of  brief explanations to subjects that keep cropping up through out my degree course such as photographic theory such as aesthetics, representation, structuralism, semiotics, etc.

Each chapter / subject can be read separately depending on which photographic genre you are working with such as portrait or landscape and some subjects will complement them all such as History and Theory.