Fascinating documentary following the work of Gregory Crewdsen as he prepares and takes the photos of his cinematic scale images using cinematic-lights a film-crew of up to 60, professional actors, cranes, assistance from police and fire departments, closure of streets exactly as a scene from a movie would be organized, staged and shot only instead of a cinematic movie camera Crewdson uses a large-format still camera.  He will then take the best examples and merge them together in Photoshop collage them in to one final perfect image.

Do I think there is more to this work than aesthetic beauty?

yes, I find his images both beautiful and disturbing, as I believe, is his intention in order to create an interesting and engaging narrative.

Do I think Crewdson succeeds in making his work ‘psychological’?  What does this mean?

Yes, I do.  His pictures are almost dream like, the scenes are very surreal.  They encourage the audience to wonder what is happening? what has just happened? what is about to happen?  They are like that moment in a dream that is taking that turn in to the nightmare.  This touches on our own imagination, our own fears, our own anxieties.

What is your main goal when making pictures?  Do you think there’s anything wrong with making beauty your main goal?  Why or why not?

I like Crewdson’s pictures they may not be as subtle as Wall or DiCorcia but they are very well made and they can appeal to a public that doesn’t have to first have an acquired taste or understanding of art to appreciate the picture that they are viewing.

I have been looking at the images by artist such as Francesca Woodman, Elina Brotherus, Sally Mann, Elinor Carucci, Richard Billingham, Tierney Gearon and Gillian Waering. 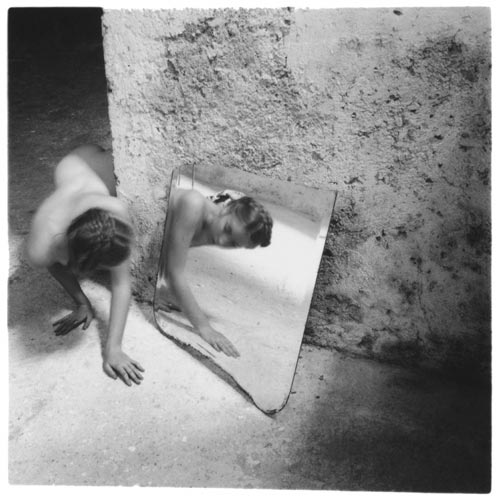 Photo by Francesca Woodman. This lined image is available to view on line: http://bibliotecaiie.files.wordpress.com/2011/01/francescawoodman.jpg

Francesca Woodman’s images I find both a little erotic and disturbing.  Woodman clearly a lot of pent up sexual-tension with an artistic voice wanting to be heard.  If I was to say that there was an element of narcissism in Woodman’s photos I think I would be wrong.  I think that she was probably insecure about herself and her looks, yes she was very self-indulgent which may sadly have lead her to her death.  I believe there are indications of her moods of depression in her images.  We all sometime feel that we could just disappear and I think that Woodman acts out some of these wished imaginings in her photos.  I personally, think that Woodman’s images don’t need accompanying text for the images to be appreciated.  However, they communicate best as set.

Woodman clearly had mental-health issues and I wonder that perhaps the wider issue here is the stigma attached to this form of health-issue and the lack of understanding and help available for sufferers.  Many artist suffer from depression as many artists by there nature are bipolar in some degree and perhaps educational institutions such as schools and colleges / universities should also watch for this and offer counselling and support.  Woodman committed suicide in 1981 and over 30 years later we are still loosing talent through our lack of understanding of how to help.

Photo by Elina Brotherus. This linked image is available to view online on her website: http://www.elinabrotherus.com

Brotherus has used her naked body to put ‘a spotlight’ on herself.  I think that her nakedness not only reflects her sense of vulnerability but also her lock of power and sense of naked honesty.  She uses nakedness to grab the attention of the audience / viewer in order to pass on her intended message.

For me Brotherus images instil mixed feelings of sympathy and admiration for both her struggle and sadness and her honesty and dignified strength.

Some may interpret Brotherus’s work as a little self-indulgent; but I would disagree.  Brotherus has used herself as a subject to bring to peoples attention issues that are often hidden.  These issues she has experienced for herself and therefore can tell the story from the inside.  By using herself as the model and subject she enforces the truth and her own honesty.

I don’t believe that this style of images can be imitated purely for image sake by ‘outsiders’.  These images come from the heart and therefore if mimicked would lack the context that these images were created to represent.  These images have been made to represent the artist own feelings and emotions and whilst the images can be replicated the emotional message the originals carry can not without some honest intent from the new artist.  In this way only another artist going through similar experiences can produce similar work and would then have his or her own style and signature.  Anything else would be a false facsimile.

As mentioned above, I believe that the motivation of these artist are to raise awareness of issues, that are often hidden from public-sight.  Naturally these issues have to be close and personal to the artist in order for the artist to be able to be an insider and produce honest and truthful images.

I have just been looking at the work of Sarah Pickering on her website: http://www.sarahpickering.co.uk/ much of her work on the website appears to have been with the assistance of the Police and Fire Brigade.

All her images lack people, all her images are totally empty of people in the streets, rooms, exhibitions spaces, etc.

For me Pickering’s project, ‘Public Order’ produces a feelings of silence, vacancy / emptiness, stillness and either implied or suggested impending doom.  The images from the Fire Brigades training facilities, ‘Fire Scene’, are disturbing images of disaster and menace, in so much as they are scenes of house fires with all the victims personal affects in place and it is easy to imagine the victim or victims asleep near by and that these are real events.  In her project ‘Incident’ she examines the charred, smoke damaged and scorched interiors of rooms and corridors that the fire brigade practice searching through under fire conditions with the recovery of victims.  Again these images produce a sense of stillness, and menace the use of black and white also adds an ‘atmosphere’ that I think Pickering wanted to convey in these images.

Is Public Order an effective use of documentary or is it misleading?

Yes, I believe ‘Public Order’ is an effective use of documentary.  The images have been set out on her website and the viewpoints that she has selected to take her pictures it is very easy to quickly realise that what you are looking at is either an Army or Police training ground.  The very first image of the entrance to the railway station and the fictional town name of Denton (made famous by ‘Inspector Frost’) clearly shows a station entrance lacking any turn styles and what appears to be film set like building fronts.  As you view each image we are taken on a tour of this training ground and we see signs of recent past use, the two cars blocking the road, make shift barricades with tires and shopping trolleys all tell their story as to the past action.  She takes us behind the scenes to where riot helmets are kept and other scenarios can be acted out.

Is this possibly misleading?

This question  is subject to the context that the images are placed with, are they not?  If we were to say that these images are of a training installation purely for the welfare for us all to protect us from Aliens, Zombies, and Vampire hoards then we would clearly be misleading.  Moreover, to suggest that these facilities could not be used to train a security force to subdue an unhappy population would also be misleading.  We can only except its existence and trust our society that in its openness to allow access and publicity for such sites we are assured that they have no other agenda than the protection public.  should these images have been taken covertly and leaked on to the internet to expose the existence of this facility then the whole context and narrative would be different.