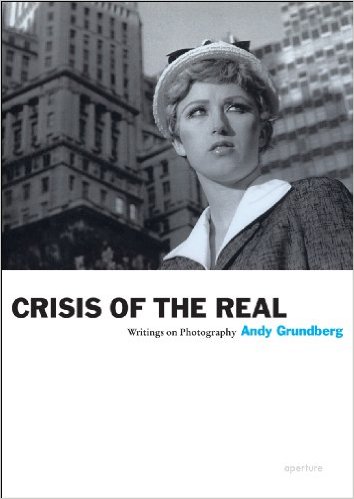 Andy Grundberg is an American art critic, based in New York who over a period of the 1980’s and 1990′ has written a number of important essays of artists and their exhibitions which he has written for The New York Times, etc.  His critical analysis of artist such as Walker Evans, Georgia O’Keefe, Joel Sternfield, Nan Goldin, Cindy Sherman, Richard Prince, Robert Mapplethorpe, Lewis Hine, Robert Heinecken, gives a very good insight into a great many of 2oth century artists both modernist and postmodernist with a helpful explanation as to the difference.  I found this book as recommended reading on Amazon and I dare say I expect to find it listed among future recommended or required readings in my OCA journey.  A good book to read.

Walker Evans whilst in association with Helen Levitt.  Hidden camera view of passengers on subway train, 1939.

Evans was born in St. Louis, Missouri, to a fairly well off middle class family, his father was an advertising director.  He spent his youth in Toledo, Chicago and New York City.  He studied French literature at Williams College but dropped out and went to Paris for a year (1926).  When he returned to New York he took a job as a clerk for a stockbroker firm and got to know the literary and art crowd in New York becoming friends with John Cheever, Hart Crane and Lincoln Kirstein.  It was in this period he took up photography and his influences included Eugene Atget and August Sander.

In 1930 he first got published with three photographs in a poetry book ‘The Bridge’ (Brooklyn Bridge) by Hart Crane and was sponsored by Lincoln Kirstein to take a series of photos of Victorian houses in Boston.

In 1933 Evans visited Cuba on assignment to take photographs for Lippincott for the publication -The Crime of Cuba’ (1933) by Carleton Beals.   During his stay he became friends with Ernest Hemingway who lent him money to stay on in Cuba an extra week and kept and hid 27 of Evans’ photographs that Evans thought might be confiscated off him when he left the country.  These photographs have only recently been discovered in Cuba and displayed.

In 1935 Evans spent a two month fixed term photographic campaign with the Resettlement Administration (RA) in West Virginia and Pennsylvania.  In 1936 Evans joined the Farmers Security Administration (FSA) for the Southern USA.  In the summer of 1936, Evans and James Agee where sent to Hale County, Alabama by Fortune magazine to cover a story that was never used.  Evans and Agee got to know three white tenant families and their stories and photographs were later used and published in a ground breaking book ‘Let Us Know Praise Famous Men’ published in 1941.  However, when Fortune did a follow up story 75 years later it was learned that the families had and were still very angry that they had not been given so much as a copy of the book and that they had been represented as being unable to do no better for themselves and doomed to be ignorant.

Levitt grew up in Brooklyn N.Y. she dropped out of school and went to work for a commercial photographer and she taught her self photography.  She became interested in the children’s chalk drawings that the children made on the pavements and walls and using her Leica camera began photographing the drawings and the children.  These images were eventualy published in a book in 1987 ‘In the Street Chalk Drawings and Messages, New York city 1938 – 1948.

1938 – 1939, Levitt associated herself with Walker Evans and in 1939 The Museum of Modern Art in New York City exhibited some of her work.  In 1943 Levitt’s work was exclusively exhibited by the curator Nancy Newhall entitled Helen Levitt: Photographs of Children.  Her next major show was in the 1960’s.

In 1959 – 1960 Levitt received two Guggenheim Foundation grants to take colour photographs on the streets of New York and they were published in a book ‘The Way of Seeing’  However, much of her colour work of the 1960’s were stolen in a burglary of her apartment.