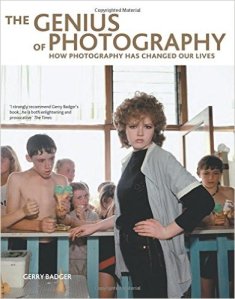 ‘The Genius of Photography, How Photography Has Changed Our Lives’ by Gerry Badger, published by Quadrille Publishing Ltd.

This book was on my recommended reading list for ‘The Art of Photography’ course but I feel that much of the reading list for that course did not echo the syllabus and I did not choose to read it at the time, preferring more relevant books that could assist me in the exercises, subject matter and assignments.  However, for this current course and for future courses this book has been more relevant and made more sense to me.

This book looks at the history of photography from a critical point-of-view as to it’s impact and development as an artistic practice.  How it has been influenced and influenced the art movements of the 19th, 20th and now the 21st century up to 2007.  Focusing on Photographers and examples of their work that have influenced the photographic art movement in their day from Daguerre to the unknown photographers using mobile-phone cameras for images that both informs and shocks the 21st century public.

Although much of the topics in this book have been covered in other books that I have already read, re-reading them will only re-enforce them to my memory and helps to plant ideas for future image making in to my sub-conscious.

The medium of photography began with the development of the monochrome / black and white image and for decades photographers honed their skills learning how to work with a very limited pallet of only shades of grey.  However, photographers quickly realized that black and white could produce stunning images and could exaggerate a sense of atmosphere that normal colour vision could not.  The portraits of the Hollywood stars of the 30’s and 40’s are a good illustration on the power of black and white.

When colour photography first came in to being it was a costly process and did not really take off until the cost of film and development fell in the late 1950’s.  At this time established photographers were reluctant to start working in the new medium.  I suggest that this was partly due to being nervous about moving out of a familiar and tried and tested photographic field in to a new area that was also gaining a reputation for amateur ‘snappers’.  Professionals with reputations may have found this intimidating and threatening and at that time colour theory was still a mystery kept and only practised by the painters in the art world.  However, in the film industry colour had been in regular use since the late 1930’s and interestingly one of the great pioneers of colour film photography was a keen painter who enjoyed making copies of famous masters for his home and to understand how they were made.  I refer to the British cameraman and film director Jack Cardiff who was the first British cameraman trained to operate the Technicolor movie cameras.  I would recommend watching some of Cardiff’s films of the 1940’s to see some good examples of how Cardiff understood both lighting and colour: ‘The Red Shoes’, ‘Black Narcissus’, A ‘Matter of Life and Death’ to name just a few.

William Eggleston has been credited as the photographer who made colour photography excepted in the photographic world of fine art when John Szarkowski, )Director of Photography of the Museum of Modern Art in New York City) discovered him and his work.

Black and white works to simplify an image creating a sense of past tense something that happened, an event, a ‘moment’.

Colour adds a new dynamic, if used well, it can add impact, by using colour theory and with the right combination on colours an interesting composition can be created from something ordinary and bland.  We see in colour; and strong colours have impact on our senses and with this in mind, interesting and attention grabbing photographs can be found.