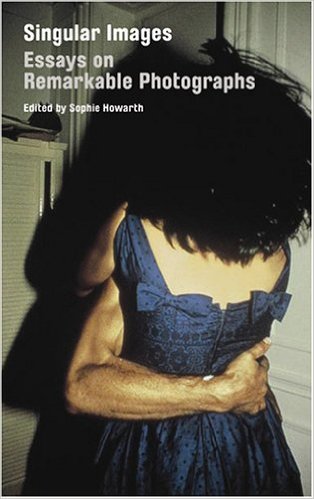 I have just finished this book, ‘Singular Images Essays on Remarkable Photographs, edited by Sophie Howarth.  I have read this book to help prepare myself for my assignment which is to write an essay on a photograph.

I enjoyed this book and I found it very interesting describing how the photographs were made, the context and connotations.

This book has has following essays:

Iago, Study from an Italian 1867 – Julia Margaret-Cameron by Roger Hargreaves

I would recommend this book and I found it a good and easy read.

A young Brooklyn family going for a Sunday outing, N.Y.C. 1966 photographed by Diane Arbus.  This image brings back memories of my childhood, as my Uncle and Aunt looked similar to this when I was just a toddler.  My Uncle had that Teddy-boy look of the 60’s and my Aunt had her hair in this style which must have been very common at that time on both sides of the Atlantic (I believe that it was known as the Beehive).  The image clearly suggests an awkwardness in the attitude of the husband and wife, neither appear relaxed or very cheerful.  The wife appears distant and unhappy whilst the husband is trying to make more of an effort; but there appears to be a mix of friendliness and sadness in his eyes whilst his mouth suggests a faint smile.  Perhaps they have argued, perhaps the husband likes the photographer Diane Arbus and his wife is aware of it.  Perhaps his young wife feels trapped, her life over before it really began torn by her youth and her duty and love as a mother of two young children, one of which is disabled and likely to be quit a handful on top of that of the baby.  The baby appears fairly quite and happy whilst the boy may be sensing his parents mood as he gives the appearance of acting and looking confused and restless.  I note that the mother has clearly spent time on her appearance with her cloths, hair, make-up and eye-brows.  Is this for the benefit of the camera, herself or for the trip out?

This picture is the subject of an essay by Liz Jobey and was published in Singular Images, Essays on Remarkable Photographs.  Edited by Sophie Howarth and published by Tate Publishing.  (This book is currently out-of-print and I obtained a copy second-hand through Amazon.

According to Jobey’s essay this photo was taken on a Sunday in 1966 and the parents were taking their children out for the day.  Arbus had got to know this young N.Y. Brooklyn family and had visited then at their apartment and took some photos there as well as this one.  their names were Richard and Marylin Daurin, Richard was an immigrant from Italy working as a car mechanic he met his wife in high school and Marylin was still only 16 when they were married.  They had three children, the two in the picture is Richard Jnr. and Dawn.  Marylin was 23 when this photo was taken and she told Arbus that she was often mistaken for Elizabeth Taylor (which I suspect she encouraged by her choice of hair and make-up).  This image was first published in a special family issue of the British ‘Sunday Times’ titled ‘The American families’ with photos of the Daurin’s in the Bronx juxtaposed against the life-style of a wealthy Westchester couple.

Arbus, by her own admission had a way with charming people in to posing for her and she became famous for seeking out people of the fringes of society and taking their portraits.  These people whom many would derogatory call freaks would be mentally ill down and outs, dwarfs, transsexuals, etc.  Sadly Arbus committed suicide in 1971.