For this assignment, I am tasked to create a photo or photos that are of a self-portraiture nature.  The brief is fairly loose; but I have had an idea that I first checked with my Tutor to be sure that it would be acceptable.

My idea is to explore the question of my identity,  how is my identity seen from other peoples perspective?

I have asked a couple of close friends and family to write a frank and honest assessment of my character and from these assessments I will extract ideas for creating images that represent Shaun Mullins as regarded by others.

My first assessment is from my father, Barrie Mullins.

Having been given my character assessment from my father, I started to jot down some thoughts and ideas.   Having read it through several times I divided the text into subject matter to develop. 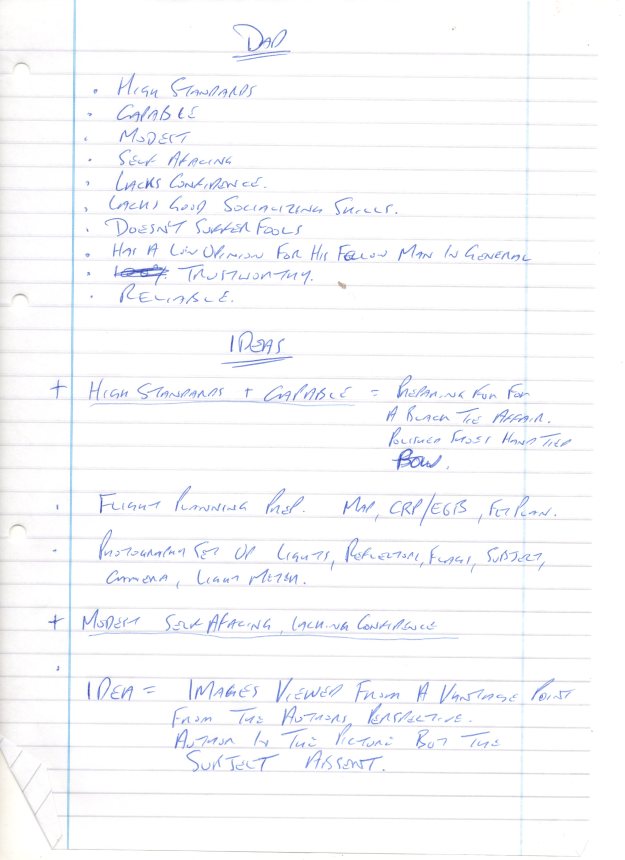 With these thoughts I narrowed it down to three subjects to use from my father’s assessment and began to think about what each can represent. 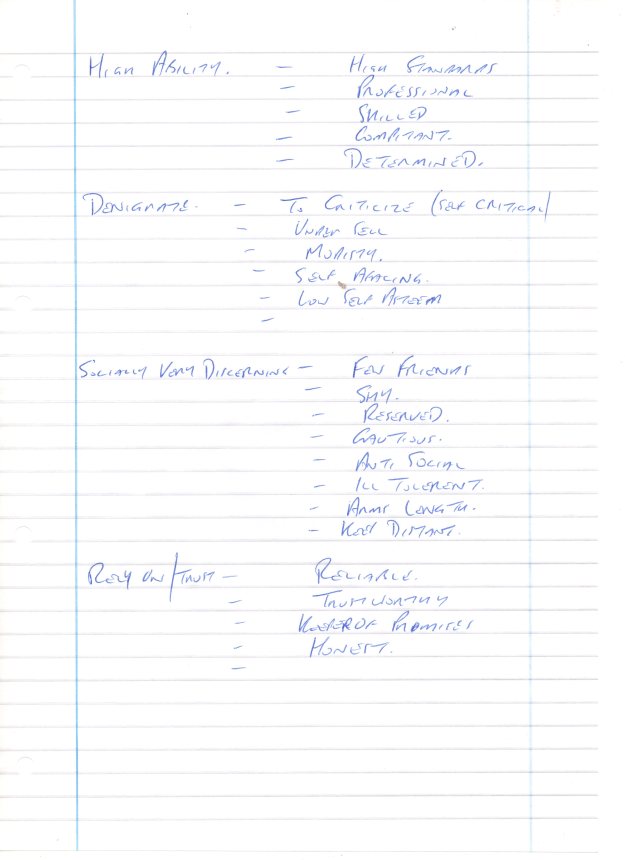 And looked again at the text and how my chosen subjects are used in context to my fathers narrative.

‘High ability’ (“when he wishes to exercise it.”)

‘He appears to denigrate any achievements’

‘A man that one would trust’

I now began to sketch and jot down ideas. 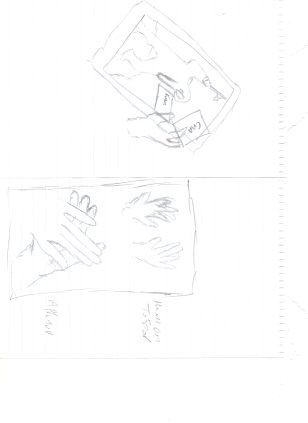 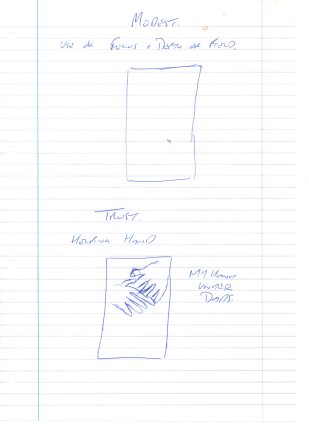 I made the decision to work in black-and-white for this assignment and as these are ‘self-portraits,  I felt that it was more appropriate and perhaps stronger for the composition if the are all framed in a portrait format.

My first attempt was for ‘High ability’ with an idea that immediately came to me and I quickly made it without bothering to sketch it first.

However, I felt that it didn’t link to my father’s text, nor was it strong enough symbolically.  I also decided that I want to make self-portrait styled pictures that only imply my presence with at most say only a hand, a shadow or just a part of my body, etc. 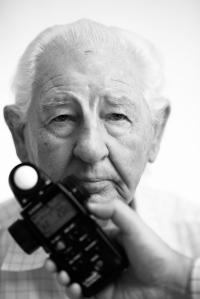 This was my next attempt; but I still felt that it didn’t convey the message of ‘High ability’.  Moreover, perhaps even my father’s face was not necessary either.  I moved on to another shot I had properly planned with a sketch.

This shot is for the last image, ‘A man that one would trust’.  My father is 87 and I thought about how this suggestion of trust could be manifested in an image linking my father and it occurred to me that giving my father a helping hand might work and this is the image I had in mind and I think it works.

However, I felt that this image still wasn’t strong enough and my wife didn’t like it either although she felt that the image of Sir Edmond Hillary conquering Everest was a strong symbol; so I had to organize a re-shoot with my father.  Unfortunately, despite his keenness to help, his patience is very short and due to his age he tires very easily and quickly; so he was quit challenging to work with, particularly when some of the shots I needed were challenging to make particularly as I had restricted myself to a portrait format.

During this same shoot, I also attempted to get an image for ‘He appears to denigrate any achievements’.  But again I felt that this just didn’t work.

On our next session together I had re-planned and the results for the two needed images I believe are now much stronger and meet the requirements that I was looking for.

This image is to represent ‘He appears to denigrate any achievements’ and I felt I needed to contrast praise with denial / refusal and I had the idea of simply my father clapping and with myself holding out my hands asking him to stop.  I really only wanted the hands to symbolism the sentiment, this proved more tricky that first thought and when I tried to sketch my mental idea I struggled.  I turned to my camera and fitting it to my tripod and tethering to a computer to see what the camera was seeing I tried different ways of composing the image.  In the end I decided to lay the camera of the ground looking up whilst still tethered to my lap-top in order to see and compose and take the picture.  With my father this still took over an hour to do and in the end I had to merge two photos together in Photoshop to get the desired combined poses in one image.  My kitchen skylight worked to provide a nice blank background with a faint cross which is the frame of the pyramid skylight that also is a nice subtle addition to the image.  Also, my fathers hands in the act of applauding with my own hands out stretched to ask him to stop appears to mimic the faint cross in the skylight.

By the time I had made some useful images for ‘He appears to denigrate any achievements’ my father was very tired; but my last image was fairly straightforward and easy to make as I could hold the camera in my hand and take the shot over my father’s shoulder for this image of my father holding a photo of Sir Edmond Hillary with my British and American Private Pilot’s Licences that he refers to in his assessment.

I now believe that I have three images that now work and link effectively to my fathers text creating a visual narrative.  One or two of my images may be considered strong enough to stand alone; but they all clearly gain strength as a visual narrative when seen together and are linked to the text.

Barrie Mullins, “He is a man of high ability when he wishes to exercise it.”

Barrie Mullins, “Despite success in life and work…….he appears to denigrate any achievements.” 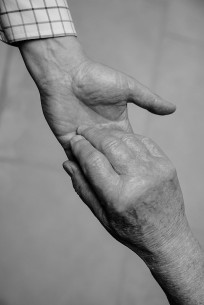 Barrie Mullins,”A man that one would rely on and trust protecting one’s back in this dangerous world.”

I have decided to only use the second and third images in my final presentation.